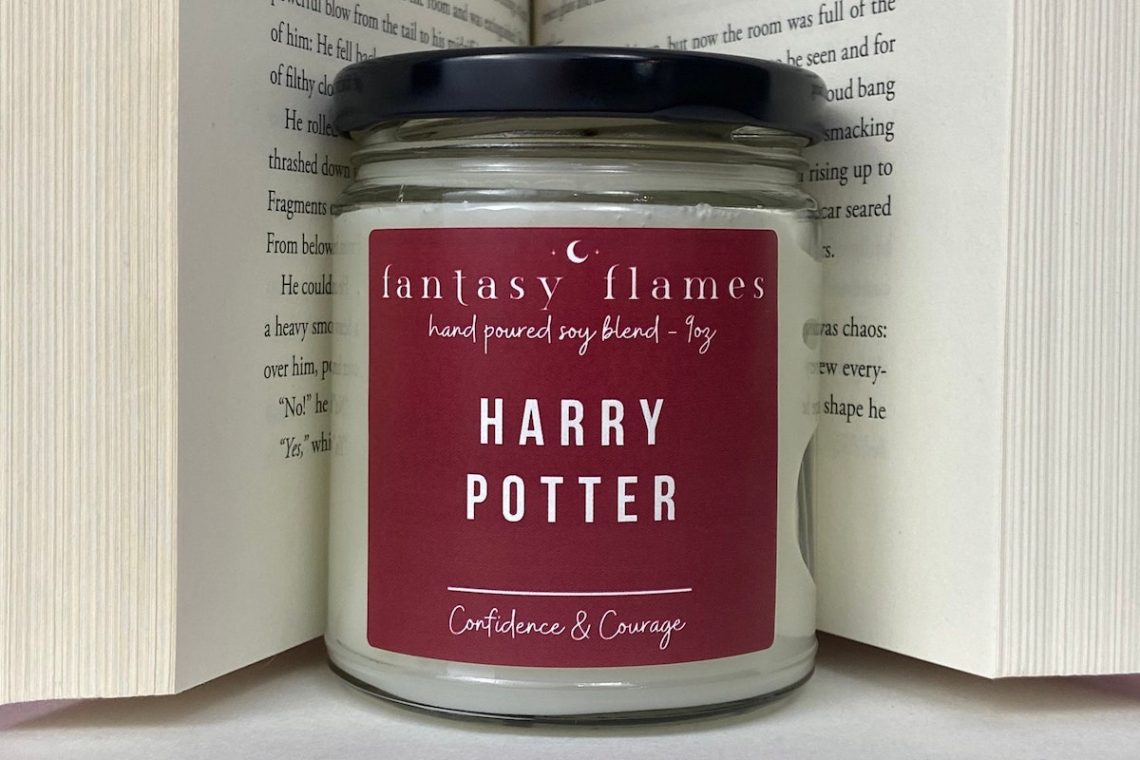 What is it that makes candles so magical? As I’m writing this story, I’m burning one of my favorite candles, enjoying the flickering light and warm aroma that emanates from it… Maybe, like music, candles are “a magic beyond all we do here.”

If you love candles as much as I do and you love Harry Potter as much as I do, you might want add a few Harry Potter scented candles to your collection. But it can be hard to find good ones, since everyone has a different idea of what our favorite boy wizard hero might smell like.

In this post, you’ll discover 15 scented candles that I think capture the essence of Harry Potter. Some are specific to his character, while others are more related to his life and the many adventures he has in the books. While you might not love them all, I can assure you that you’ll find at least one worth adding to your collection – but probably several! Read on tho discover the best Harry Potter-scented candles.

Featured image by FantasyFlames on Etsy

It was hard to choose which Harry Potter-scented candle to start with on my list, but I think this one from Fantasy Flames is probably my favorite for a couple of reasons.

First it’s a cute glass jar and seems to have the right width-to-wick ratio (so you don’t end up with a bunch of extra wax lining the outside of the jar). Second, the scent perfectly captures the essence of Harry – classic and comforting; the two main scents are cedarwood and vanilla, which reminds me of broomstick handles and treacle tart.

For another option with a similar – but definitely different – scent profile, check out the Harry Potter candle from Hedwick Candle Company. The primary scents include cinnamon, sandalwood, and vanilla, which sounds like a lovely evening in the Gryffindor common room after a good Quidditch practice.

Best of all, this candle features a wood wick, so it crackles just like the fireplace when it’s been properly set up by the Hogwarts House Elves.

(This candlemaker also has had other HP-inspired scents in the past, like The Great Hall and The Burrow, so be sure to favorite the shop if you like this one.)

C & E Craft Co has a whole line of “Smells Like” candles which are really fun to browse – but for this list of Harry Potter-scented candles, we obviously care about the one that “Smells Like Harry.”

What’s interesting though is that the candlemakers don’t assume they know what Harry smells like – you get to choose when you purchase the candle from a number of scents like “Cedarwood Orange,” “Mahogany Teakwood,” and “Iced Vanilla Woods.”

The candlemakers recommend “Flannel + Musk” if you need some guidance, saying it evokes the adventurous yet caring sides of Harry’s character.

If you’re looking for a Harry Potter scented candle made by someone who is just as big of a Potterhead as you are, look no further than this HJP candle from Olivia Honeyduke Designs.

Claiming to be “hand poured in Hogsmeade,” this candle is designed to be totally committed to the Wizarding World, inside and out. From the colorful, almost Weasley’s Wizard Wheezes-style label to the scent inside (Teakwood, Peppercorn, Sandalwood and Dark Musk), you’ll be happy with this candle.

For another option, consider making this candle your Chosen One.

Made by Enchanted by K on Etsy, it has primary scents of butterscotch and teakwood – think butterbeer and a broomstick, if you need an idea of how that might smell. I like to imagine it’s the Gryffindor Quidditch team tucking into a round of butterbeer that Fred & George acquired from Hogsmeade after a good game.

If you like this scent, be sure to check out the stores other Wizarding World inspired candle scents like Dark Forest and Pumpkin Juice.

If your candle preference leans less toward homemade/hand-poured, be sure to check out the official Harry Potter Hogwarts candle from PB Teen. This candle is currently on sale as of writing so may be going out of stock soon, but I wanted to include it as it is one of the officially licensed options.

The scent notes say that it includes oud (agarwood), patchouli, and tonka bean along with citrus lemon and cedar leaf. It’s definitely one of the most complex and interesting scented candles on this list – especially if you like patchouli (I personally do not!).

Another officially licensed Harry Potter-scented candle comes from Charmed Aroma. This candle company is fun because they hide little rings within each candle; you might discover a ring adorned with a pair of sparkling spectrespecs or glasses and lightning scar.

The candle itself is rather un-Harry-ish (“Pink Currant / Floral” is what the listing says) but maybe targeting a different kind of Harry Potter fan since there’s, you know, jewelry inside.

It’s not currently available on Amazon but I expect it will be back in stock soon. The company also has an entire other Harry Potter product line on their website.

In addition to the Harry Potter scented candles I found above which are specifically about Harry, I found a few other candles I thought really fit Harry and his life. You might enjoy these ones just as much – if not more – as they evoke all kinds of memories for me.

You’ve probably heard about the internet trend of trying to decide which Bath & Body Works/White Barn candles smell like Harry Potter characters, right? Well the general consensus was that Autumn Woods is the most Harry Potter-ish scent in the whole store – and that’s a lot of scents to choose from!

The official notes are that the candle smells of dark walnut, English lavender, and white amber which sounds about right, based on other candles on this list!

Unfortunately, Autumn Woods is a seasonal scented candle (as you might guess based on the name) and is not currently available in Bath & Body Works stores. It is available through their Amazon shop though.

Christmas in the Great Hall

While not specifically Harry Potter scent, I thought this candle from LuminousLibrary was a really nice choice for HP fans because it evokes the wonder of the many Christmases Harry spends at Hogwarts. With scents of cinnamon, clove, and fir needles, I can just picture Harry and friends sipping mulled cider while Hagrid brings Christmas trees into the Great Hall to set up for the feast later.

This candle from Scaredy Cat Candle Co is currently sold out, but you should definitely add it to your favorites list on Etsy anyway. Where better to imagine Harry finding some peace than the place where it all began? The scent notes include frosted juniper, oak, moss, amber, and “chilly citrus,” evoking childhood memories and a cold Christmas Eve night according to the candlemaker.

Hogwarts is My Home Candle

Among the many characters who considered Hogwarts home in the series, there’s none who feels it more deeply than Harry. That’s why this candle from Fantasy Flames (same as the first candle on this list) makes the cut among Harry Potter-scented candles that aren’t specifically about the character.

The scent notes for this candle include warm vanilla, and spices, with notes of amber and cinnamon – oh, and of course “magic.”

I found two Felix Felicis candles during my research, so decided to include them both on this list of Harry Potter candles because Harry’s the main witch or wizard we see use the potion during the series. (Of course, Slughorn has also used it twice and several other characters use it in the battle atop the Astronomy tower.)

This candle from Witchy Wicks Candle Company is beautiful – it literally shimmers and glitters just like a little bottle of Felix would. Unfortunately, the shop is taking a break so you’ll need to sign up for notifications when you can buy it. For another option, this candle from Candle Chronicles is a nice option, with notes of Juniper Berry, Jasmine, and Honeysuckle.

I also found a few candles inspired by the Patronus charm, which I also thought fit Harry since he showed skill casting the charm at such an early age – despite having such a dark and unhappy childhood. This candle from Candle Chronicles has scents of Black Currant Tea, Rain Water, and Amber, and reveals a small charm of your own Patronus as it burns. Similarly, this candle from Enchanted by K shimmers and glows as it burns to reveal a patronus charm too; it is “fresh water breeze” scented.

Finally, who better to say smells like a Quidditch pitch than Harry, who loves the sport so much. Okay, maybe Oliver Wood who was actually fanatical about it, but I don’t plan on having a list of “Oliver Wood scented candles,” so this one goes to Harry.

Also made by Luminous Library (like the Christmas at the Great Hall candle above), this candle has scents of fresh cut grass (which we know Harry loves as he smells it in Amortentia…), mahogany, and “sunshine.” Not sure what sunshine smells like exactly, but it sounds delightful!

I know, it’s tough to choose just one Harry Potter-scented candle to buy – so just get a few and then you can enjoy them all! Have any questions about these Harry Potter candles? Let me know in the comments. 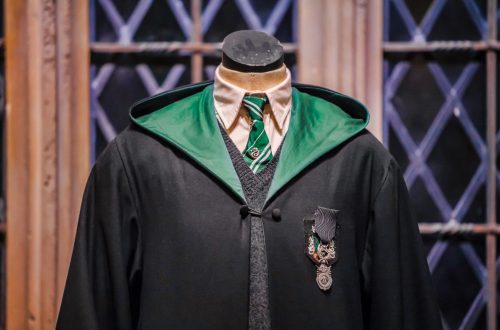 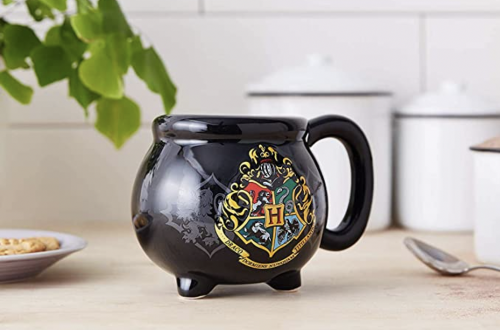 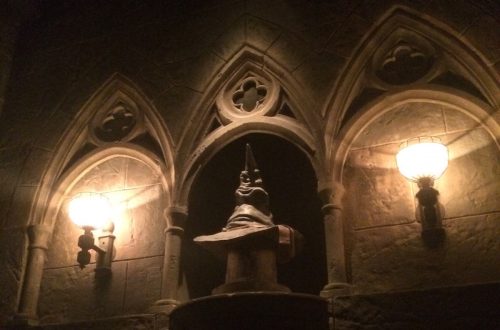